I’m not so good at keeping others informed of my news, but as spring is here — that traditional time of taking stock, reorganizing and looking ahead — I thought I’d write a letter to the Internet world out there and tell you what I’ve been up to and what’s ahead.  I might get long-winded, so you can skip around by clicking on these headings.  Travels, Skype Teaching in Australia, ClassNotes Holocaust Residency, Joachim Prinz Violin Concerto

This year I’ve travelled far and wide and had lots of fun.  Some highlights include guest leading with the Scottish Chamber Orchestra in Edinburgh and Swedish Radio Symphony in Stockholm, an amazing week at the Banff Center in Canada with the Australian Chamber Orchestra and a fun tour of Japan with the Orpheus Chamber Orchestra.  Also exciting this year was performing a new rondo for violin and orchestra, written for me and the Boston Classical Orchestra by Thomas Oboe Lee.  Coming up, I’m looking forward to spending much of the summer in France, as concertmaster of the Orchestre d’Auvergne, a small chamber orchestra, and then back to the US for some fun summer chamber music. 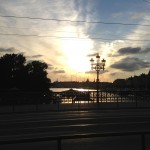 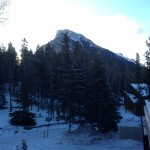 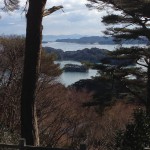 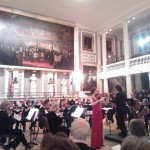 For the last few years, under the auspices of the Australian Chamber Orchestra, I have been teaching elementary school students via Skype at Picton Elementary School near Sydney, Australia in collaboration with Melissa Wheeler, a visual artist.  We have been exploring connections between music and visual art.  I was excited to come to Australia in November for a residency at Picton and meet the students in person.  At the end of the residency, I and 3 other members of ACO played a concert for the school, and the students’ artwork was displayed around the auditorium.  I took this video of some of the artwork…

(Here are transcripts of the captions, written by the students and teachers.)

“4J learnt a haiku poem.  With Sharon and the ACO musicians 4J composed a piece of music for the haiku poem.  They then created a key using patterns for the Haiku.  They worked with Melissa the artist to produce this artwork that reflects the haiku.  They had so much fun and learnt so much!”

“During our skype sessions with Sharon we listened to how she used her violin to represent different emotions and feelings.  We looked at art work by Picasso and how he used different colours and shapes to show his emotions and thoughts.  We combined both of these ideas and completed abstract faces showing different emotions using lines and colour.”

“We listened to music from Peter and the Wolf and used crayon and water colour paint to show how the music made us feel.  Some used realistic forms while other used abstract shapes.”

This coming April, the non-profit that I started, ClassNotes, is teaming up with Leon High School in Tallahassee, Florida, for a special residency about the role of music in the Holocaust.  With Max Mandel, viola and Caitlin Sullivan, cello, we will visit the history, orchestra and chorus classes, reaching over 300 kids.  A final concert on May 3 will conclude the residency, open to the community at large, which will feature performances by us, the school chorus and the school orchestra, featuring music that was written and performed in the concentration camps.

In tandem with our residency, on June 6 and 7, Cobb Middle School in Tallahassee will present a staged production of Brundibar, a children’s opera by Jewish Czech composer Hans Krasa, which was originally performed by the children of Theresienstadt concentration camp in occupied Czechoslovakia.  I will work with and lead the pit orchestra of students.  One of the original children who performed the opera at Terezin, concentration camp survivor Ela Stein Weissburger, will come to share her story. 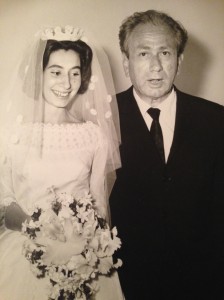 I’m thrilled to be premiering a new violin concerto by Bruce Adolphe with the IRIS orchestra and conductor Michael Stern in January 2015 in Tennessee.  A few years ago I approached Bruce (whom I met when I was twelve!) and asked him if he would write a violin concerto for me.  He mentioned that he had been wanting to write a violin piece inspired by the life of Joachim Prinz, a rabbi who lived in Berlin in the 1930s and saved many lives by urging Jews to leave Germany; Prinz then emigrated to the US, became friends with Martin Luther King Jr. and was a very active presence in the civil rights movement.  (He gave the speech just before MLK’s I have a Dream speech in the March on Washington.)  I was very excited about this idea, because in the wake of the Newtown shootings and so much other violence in our country and around the world, I had been brainstorming ways to use music to teach empathy, express emotions, and combat bullying.  When Bruce told me his idea, I thought it could be a great backdrop for an interdisciplinary school curriculum connecting history, literature, art and music, teaching the Holocaust, Civil Rights, and the role arts can play in fighting injustice and preserving the human spirit.

I wrote to Michael Stern, conductor of the IRIS orchestra, an adventurous chamber orchestra who’s mission is to “to present innovative programming in combining treasures of the classical cannon alongside exciting American repertoire, including new works commissioned and premiered by IRIS; and to bring consistent service to the community.” Michael and the executive director of IRIS, David DePeters, were excited about the idea too and commissioned the piece for the premiere in January 2015.  IRIS has put together an education committee and we are in the process of creating curriculum and outreach activities that will take place in the fall of 2014 in public schools in the Germantown/Memphis area.  More info on this to come.  Last thing about this project – on a personal note, the most amazing, goose-bump-inducing coincidence occurred after all of it had been put in motion — I was talking to my mom about the project and she said, “Wait… Joachim Prinz?  He married us!”  Yes, it turns out that my grandparents knew Joachim Prinz from Germany and asked him to marry my parents.   Here is a picture of my mom and Joachim Prinz at my parents’ wedding.   It feels like destiny that this project arose and I’m very much looking forward to working with the students and premiering the concerto.

I think that’s all for now; for anyone who actually made it to the end of this rambling letter, I wish you all a happy springtime and great music listening.